PLEASE NOTE: this demo is non-interactive and does not imply our intended final production quality!

A dozen passengers are trapped in the subway with a killer on the loose. Inside the cars and in the surrounding darkness of the tracks, characters are mysteriously picked off by a cunning killer; alliances form and finger pointing ensues, as each believes another is guilty. The whodunit unfolds in the manner of a classic Agatha Christie mystery, but with the grit and pulp of modern-day New York City as a backdrop.

3RD RAIL’s primary interactive element — and what sets it apart from traditional films — is the ability to choose which subway car to view in real-time. By using an input device on any connected platform — a mouse, remote control, touch screen, or keypad — viewers can instantly switch between multiple simultaneous storylines and uncover clues on their own. 3RD RAIL lets you become the detective.

Season One has been written as 20 episodes; each chapter is approximately 5-7 minutes long. 3rd Rail takes place in real-time, so each episode covers 5-7 minutes of the passengers’ captivity on the train. As the viewer, just when you think you’ve figured out who the murderer is, that suspect is killed and the mystery renewed; every episode ends in a cliffhanger.

Clues, interactions, and even killings will be “hidden” throughout each episode, while viewer-triggered flashbacks incrementally reveal the backstory and form another layer of mystery to unravel. Through triggered flashbacks and simultaneous storylines, 3RD RAILS’s wealth of hidden content creates meaningful rewards and implores viewers to replay each episode in an attempt to solve the mystery.

3RD RAIL will be the first property to utilize our New video game engine for film.

The SBWY platform will power interactive video properties for years to come, and 3RD RAIL is the proof of concept that will demonstrate demand and build traction — it is the Mario to our Nintendo. SBWY will expand into branching storytelling architecture for 3RD RAIL’s second season and other future original properties, while extending into licensing opportunities for existing AAA film and video game franchises. The SBWY platform will also power interactive, immersive advertising — a lucrative industry where engagement is the name of the game.

3RD RAIL will employ a “freemium” business model: non-interactive “director’s cut” versions of each episode will be released on free-to-view platforms like YouTube, where they’ll be monetized with pre-roll and overlay ads, generating revenue on the marketing material itself. These non-interactive episodes will upsell to their interactive counterparts, which will utilize per-episode, subscription-based, and free-to-play business models. We’re letting people watch 3RD RAIL how they want it, where they want it, on devices that already have their credit card information, like the iOS, Xbox, and Playstation digital marketplaces.

3RD RAIL and the SBWY platform are currently in preproduction.

We are currently raising financing for 3RD RAIL's Fall/Winter 2014 shoot, which will be co-produced with Dogfish Pictures (Like Crazy, Compliance, Prince Avalanche); EXIT STRATEGY is also currently seeking additional financial, creative, technology, and co-production partners. A preliminary milestone and phased financing timeline is below.

The feature-length screenplay for 3RD RAIL is available upon request. Contact us to learn more: contact@exitstrategy.tv 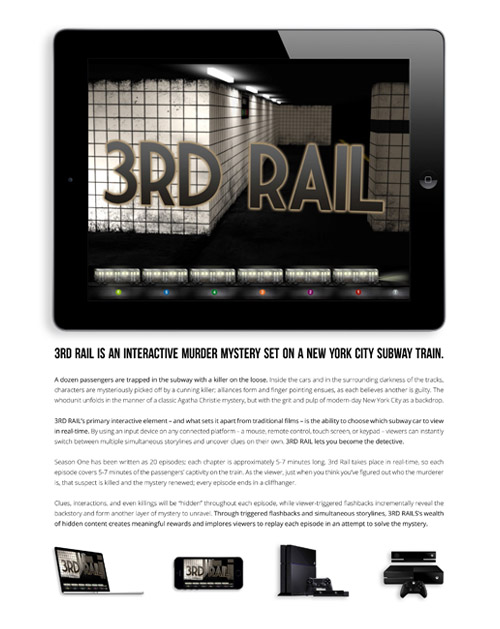 Download 3RD RAIL's one sheet ⤴
(pdf, 350kb)EXIT STRATEGY was founded by Ryan Koo and Zack Lieberman. Together, they wrote, directed and produced the “urban western” web series THE WEST SIDE (thewestside.tv), which won the Webby Award for Best Drama Series. Koo is the founder of the popular filmmaking website NO FILM SCHOOL (nofilmschool.com) and Lieberman won an Emmy Award for his digital work at Sony Pictures Television. EXIT STRATEGY has helped build a network of websites that garner over 50 million combined page views per month for web and video clients including MTV, CMT, VH1, Rhapsody, Focus Features, Saks Fifth Avenue, Ralph Lauren and Dr. Oz.

We'd love to tell you more about our company and what we're up to. Check us out at exitstrategy.tv or contact us to say hello: contact@exitstrategy.tv